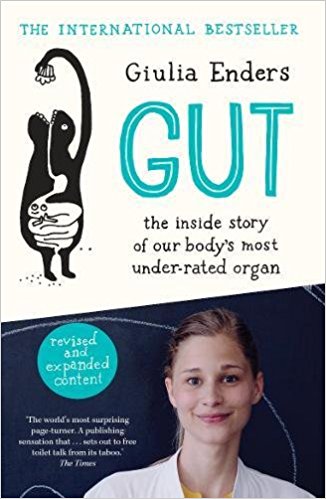 Gut reaction - A faszinating book celebrating the digestive tract - and an essential read for all with digestive issues.

Giulia Enders book: Charming Bowels (Darm mit Charme), which has been at the top of the German paperback charts - has become an International Bestseller.

To dismiss Giulia Enders' debut work as a "toilet book" would do it great injustice – not least because the author argues that we shouldn't really be reading books in the lavatory anyway.

Darm mit Charme ("Charming Bowels") – which has sat atop the German paperback charts for the last eight weeks and shifted more than 200,000 copies in the process – may deal with defecation, constipation and other bowel movements, but its message is far from flippant: our gastrointestinal tract is not only the body's most under-appreciated organ, but "the brain's most important adviser".

In the book, Enders argues that we are unduly proud of the complex achievements of our brain and heart, while regarding our bowels as little more than a shameful tube that produces "small brown heaps and farting noises".

Few know that only the last of our digestive tract's eight metres deals with faeces, that it produces more than 20 kinds of hormone, contains more than a thousands species of bacteria and is controlled by a nervous system that is almost as complex as the brain's.

And Enders argues that even scientists like her – a 24-year-old doctoral student at Frankfurt's Goethe University – have only in recent years started to explore the possibility that the health of our bowels could have a more direct influence on our mental wellbeing, our motivation, memory and sense of morality than our DNA.

Enders' gut manifesto calls on its readers to celebrate their lower bodies' achievements, rather than apologise for them: a burp or a fart may be considered coarse, yet the movement it requires from our bowels is "as elegant as a ballet dancer". We complain about having to throw up, when in fact we should thank our body for the "masterful performance" it is putting on to protect us.

Along the way, Bowels with Charme issues practical advice: sitting, rather than crouching while doing your business unnecessarily prolongs the process and may explain why haemorrhoids and bowel diseases like diverticulitis are more common in Europe than in Asia. Placing a little stool in front of the toilet could help us all pass our stool, says Enders – and we'd no longer need that pile of books in the bathroom.

In Germany, her book has been received enthusiastically. The YouTube clip of Enders competition-winning "science slam" in 2012, which prompted a publisher to commission her, has long gone viral, and Enders has already appeared in many major talk shows.

Charmin Bowels (Darm mit Charme) however is hardly a new phenomenon: in 2008, Charlotte Roche enjoyed a similarly unexpected bestseller with Wetlands, a novel about an 18-year-old girl sent to hospital for a haemorrhoid operation.

Source: article published in May 2014 by the Guardian https://www.theguardian.com/books/2014/may/07/gut-reaction-book-digestive-tract-german-bestseller